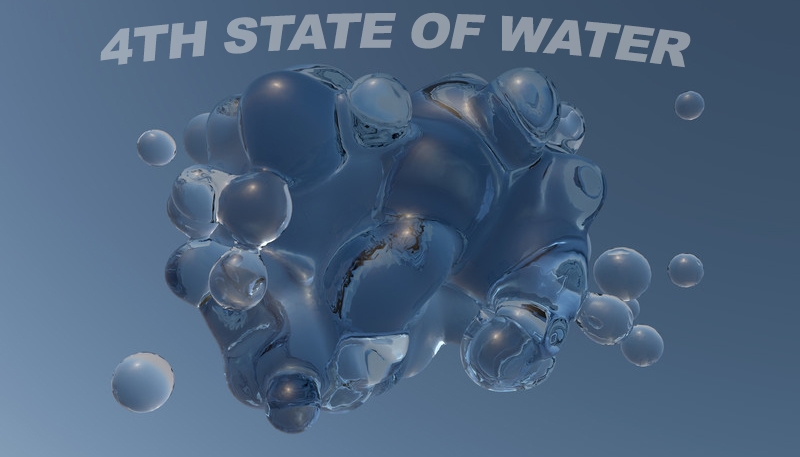 The Fourth State of Water Discovery!

The Fourth State of
Water Discovery!
Los Alamos Nuclear Scientists thought it was impossible to change
the Hydrogen Bond Angle in water in spite of my machine that potentially
expands human life beyond 120 years free of disease: “The Medicine
of the Future” at the nuclear level using Einstein’s E=mc2! 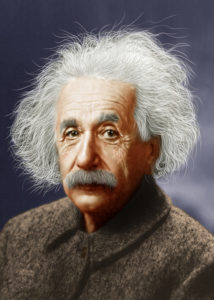 Even Albert Einstein agreed that it was possible to change the hydrogen bond angle of water.

Although I am in my 90th year, people meet me and say: “IT LOOKS LIKE YOU STOPPED AGING!” This is because I discovered the FOURTH STATE OF WATER (beyond solid, liquid and vapor)! An amazing NEW FORM OF ENERGY that I used at The Choate School to save my own life (I had cancer when I was 14 years old), it’s been an uphill battle in spite of saving thousands of lives worldwide for 45 years … reported by THE FARADAY TWINS author with 16 million followers! A retiring executive with a major Washington newspaper, he used the HUNDREDS of letters and phone calls they received to write the book.

Although the massive Energy released splitting an atom (Nuclear Energy) is much greater, I discovered how to release the pent up Electron Energy in water by rapidly heating and cooling water (3 times/minute) to weaken the powerful Hydrogen Bonds and achieve the FOURTH STATE OF WATER that has a permanent 114 degree Hydrogen Bond Angle (THE HYDROGEN BONDS CAN’T RETURN BACK TO ORDINARY WATER AT 104.5 DEGREES)!

As a result, the body uses LESS ENERGY at 114 degrees to split water into Hydrogen and Oxygen than at 104.5 degrees … with extra energy left over to fight aging and disease! Since less energy is required … users look younger. Guy Abraham MD did hundreds of Independent Blood Flow Studies on Patients using our machines (he taught at UCLA Medical School): “We can measure the ability of blood to go through a membrane and into the cells to the extremities. Nothing is even close to your water to flush out the Blood Stream. You increased the Hydrogen Bond Angle to 114 degrees, no wonder we get these results!”

Who would know if that’s possible? Albert Einstein of course! When visiting a friend at Princeton in the late 1940’s I met the great man himself as he walked from his home to his office puffing his pipe with a trail of smoke behind him. He was known to everyone and very approachable. I asked him if the Hydrogen Bond Angle in water could be increased to release all that pent up energy. He said: “It’s possible!”

And yet, almost 70 years later, scientists at Los Alamos Nuclear Lab said to the newspaper author of THE FARADAY TWINS: “You have a scam artist advertising the “impossible”!” So now we have the world’s greatest scientist saying “it’s possible” and the top scientist at Los Alamos with four PH.D.’s saying “it’s impossible!”

The author said: “You call John and if you decide it’s impossible we won’t accept his ads!” However, after buying an E5 machine, they called the author back: “He DID change the Hydrogen Bond Angle in water and we wish we owned his patents!”

Note: When you have a physical, they check your Blood (94% water) for disease … NOT the water you drink!! 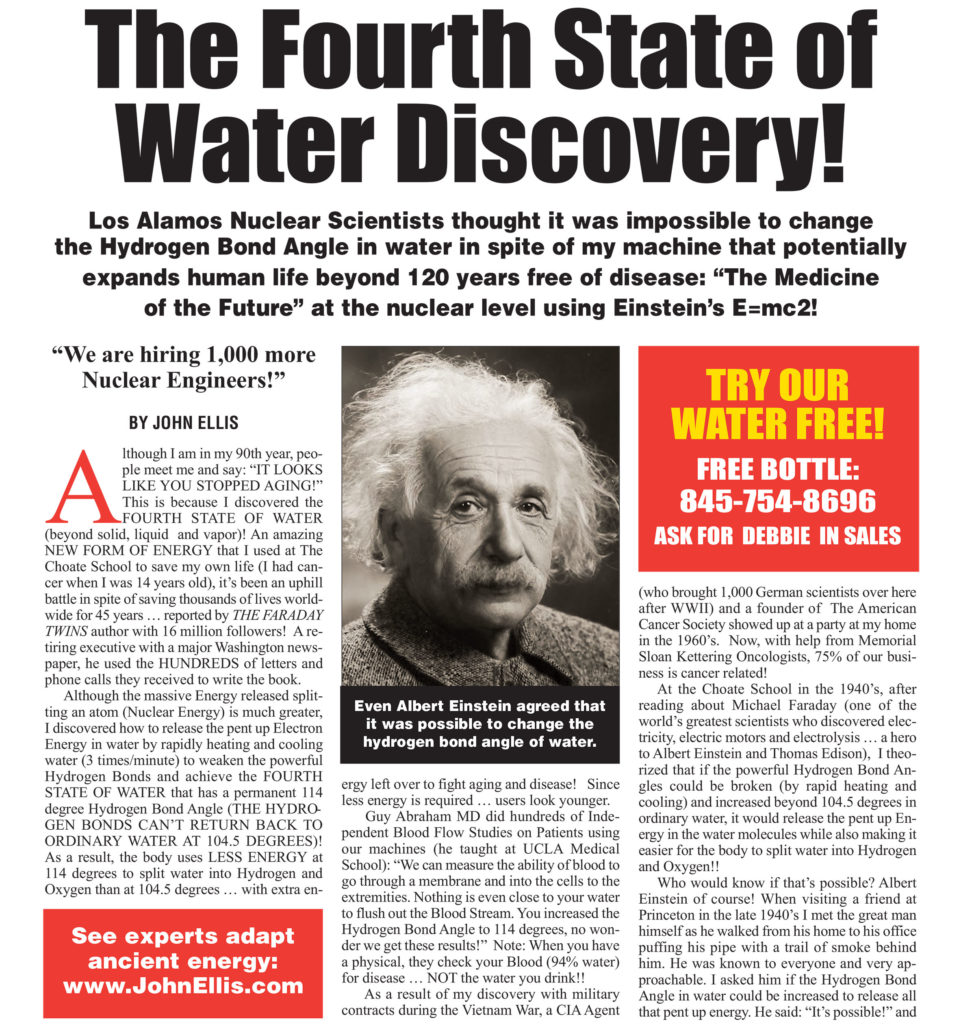 The Fourth State of Water Discovery! 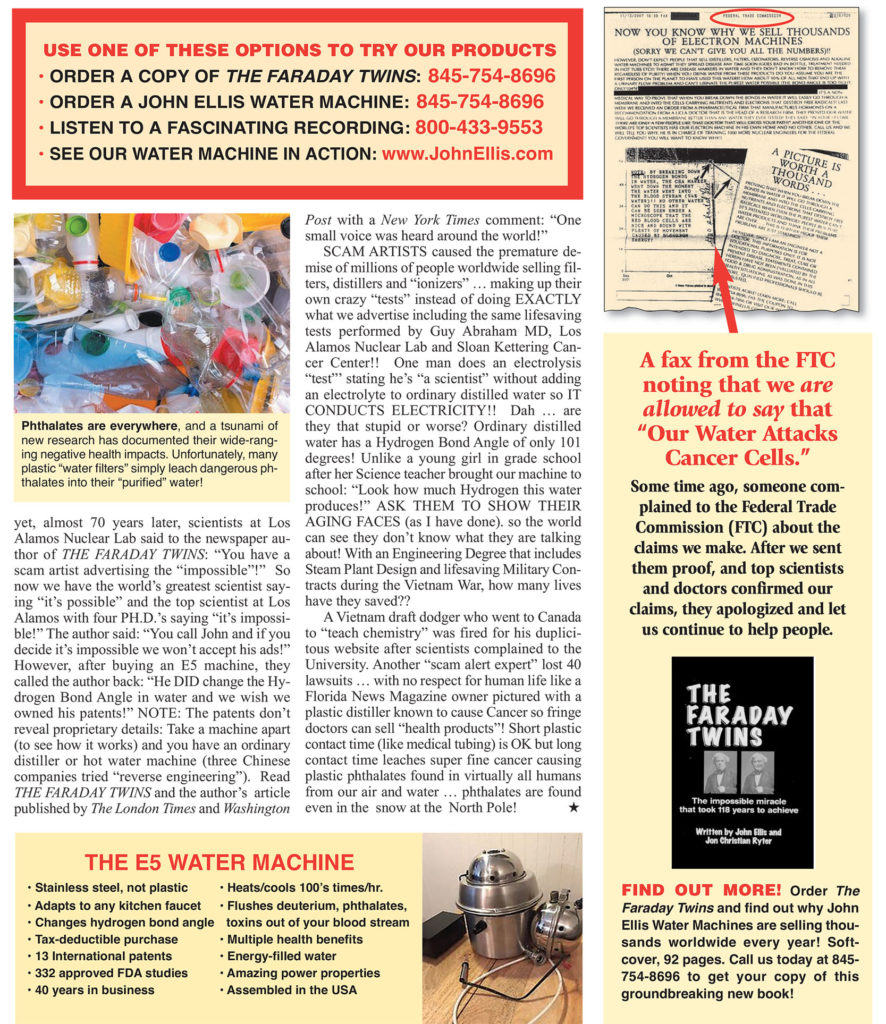 Too see this in action, watch the video below, by using electrolysis John Ellis Water’s mysterious properties come to life, our water as shown below can be split into Hydrogen and Oxygen more efficiently and effectively than any other water found on our planet.